Lawn Bowls is the fourth most participated sport in Australia and fifth in the world. Coastal Waste recently sponsored ten players in The Everest of Bowls, Australia’s richest open singles lawn bowls tournament in Australia, and the second richest in the world. With a total prize pool of $100,000 and a massive first prize of $50,000 the tournament being no mean feat to get through, given it attracts 96 of the best players from all around Australia and the world to ply their skills in this world class tournament, held right here in the Peel Region of Western Australia at Dudley Park Bowling Club in Mandurah.

Team Coastal Waste was made up completely from WA players – two local players, two ladies, two country players, two brothers and two under 25’s. Competitors included the entire Commonwealth Games Squad, along with top line Premier League players from NSW, Victoria, Queensland and South Australia, along with our own local WA talent. Commencing on the 11th October, sectional play started on Thursday and Friday, with players randomly drawn into sections of four players and needing to beat every other player in their section to progress to finals sectional play on Saturday with an eye firmly on the finals, held on Sunday.

Players endured wind and rain on the Saturday afternoon as the first elimination games got underway to determine the final four who would be scheduled for the finals on Sunday, with the final eight turning into the final four. By Saturday afternoon, three of the semi-finalists from four, to play on Sunday were from Team Coastal Waste and after a day of windy, cold, rainy conditions, Russell Bates from Team Coastal Waste would reign victorious and take out the massive $50,000 first prize. 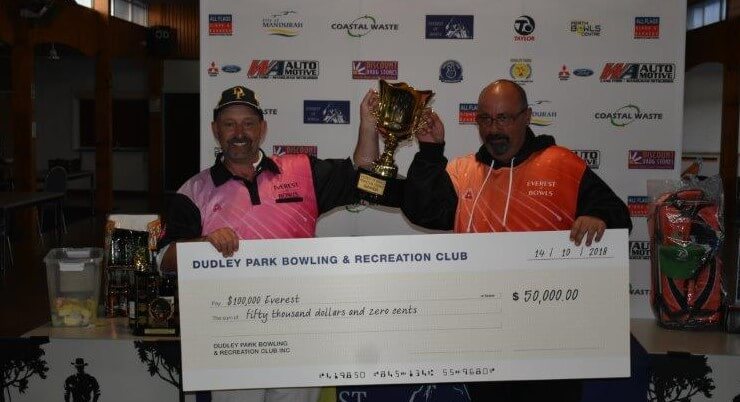 Coastal Waste would like to congratulate Ronald Bates who is Russell’s older brother and Scott O’Brien an emerging State Player from Mandurah Bowling Club, both also Team Coastal Waste Players, on making it to the semi-finals as well as Daniel Brown from Kardinya Bowling Club, who did battle with Russell Bates in the final and only just came up short, but acquitted himself exceptionally well. Most of all we congratulate Russell Bates who is no stranger to life’s challenges on his epic win in the 2018 Everest of Bowls.

In its inaugural year, last year the competition was won by Aaron Wilson who after winning the Everest, went on to win Commonwealth Games Gold for Australia. This year, the final eight players were made up mostly from WA talent, which goes to prove that WA can take it up to the rest.